Yesterday, while scenery was drying on the club layout, I made a quick ballasting test using my homemade ballast. This material is sampled and sifted from an abandoned limestone and clay pit located nearby.

To be blunt, I'm far to be satisfied by the results for many reason I'll take a few minutes to explain. This isn't what I'm looking for at all and it doesn't fit Temiscouata pictures.

Let's talk about the prototype. On all picture, there is virtually no roadbed. The track is at ground level except when topography required a fill, an embankment or cut. The very notion of ditch seem to have been highly ignored by Temiscouata Railway. The ballast isn't ballast as I suspected. It is nothing more than earth and dirt. Very fine dirt in fact and exactly the same that can be seen on adjacent lots. When you look at this picture of a construction train back then, you can clearly understand anything goes on.

Let's take a look at the prototype ballast before analyzing my test. The first picture was shot at Rivière-du-Loup with the glamourous Madawaska business car (which I'd like to reproduce). The ballast is plainly dirt.

On this other picture, taken at Cabano, the ballast as some bigger chunk in it, more akind to a dirty gravel. But still, is not what you would call real ballast.

Now let's look what I did and why I think I failed... 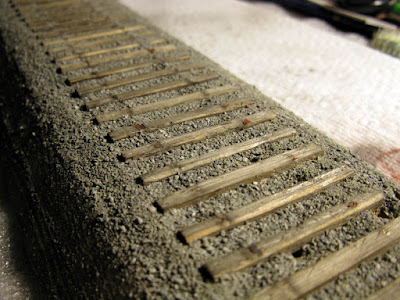 First, my ballast is too coarse compared to the prototype. Given the ties are roughly 9 inches wide, it means some rocks are about 3 inches in diameter, which is clearly too big. It doesn't look like earth to me. 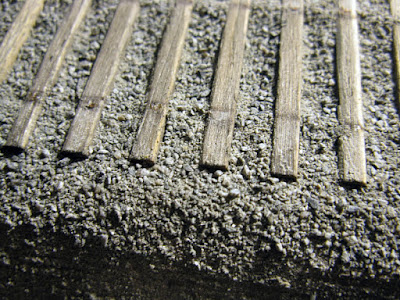 Another problem is the ballast "powder. that gets into the distressed wood grain, killing a good deal of the effect by making the cracks look whitish. 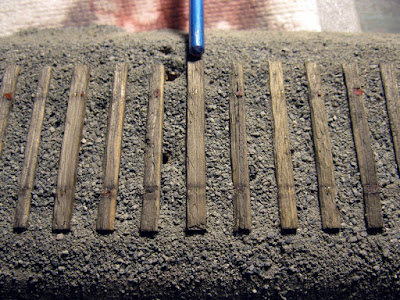 I tried to remedy to that problem by cleaning some ties and applying another light coat of alcohol and India ink. The improvement isn't that much great. 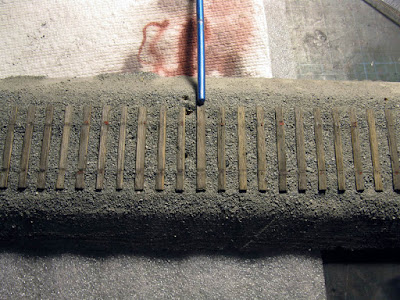 Finally, I put too much ballast, even if I tried to not bury the ties. The big problem is that ballast get caugh under the rails which kills the effect of "floating" rails so typical on Temiscouata.

Also, I'm not too sure about the ballast coloration. It is far too gray to my taste. I believe it should be a little bit browner, maybe slightly tan. I'm not sure. Should there be more contrast between the ties and ballast? I'm not sure either. Maybe the soil should be slightly darker to make the greyish and decaying ties pop out? Or maybe the ties should be a little bit more brown/tan. I say that because I've just looked at some old color slides from QRL&PCo - namely an old stub switch - and the ties are squared logs and seems untreated and they have a nice golden coloration... very similar to what Bernard Kempinski does. I think he was right!

At this point, I'm alsolutely open to any suggestion to improve the look. Meanwhile, I've ordered some supplies including rails, ties and spikes. As you can see, my glued rails popped at the first occasion, but it's because ofo that I was able to discover ballast gathered under the rail.

This brings another set of question. Should the ties and ballast be placed before laying rails? Or should the final distressing should be done AFTER ballasting and before laying track, making sure the ballast wouldn't fill the cracks? The answer will probably be got by laying a few other test tracks and trying each techniques. My biggest concern would be for turnout...

Also, I think I'll have to make the tie edges rounder to better represent half-sawn logs.
Posted by Matthieu Lachance at 7:16 PM