This project have been in the drawers since many years and is now ready to take off. I hope you will enjoy this ride in the realm of achieveable layouts where you do what really counts to not burn you out. 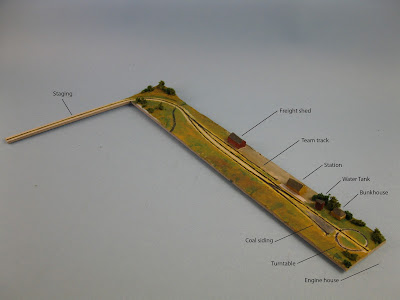 Because it's small, easy to build and a great little prototype that begs to be modelled. Ever since I stumbled upon that prototype many years ago on Trainweb.org, I regularly thought about building it. Temiscouata Railway was local branchline that connected the Intercolonial Railway in Rivière-du-Loup, QC to Edmundston, NB from 1889 to 1948. During the railway building spree of the late 19th century, this railway was thought to be the missing link so the Grand Trunk Railway of Canada could reach Moncton and Halifax. Shoddy business strategy from competitor and political interference quickly reduce the wannabe class I line into a rural branchline to nowhere.

Very rare are Canadian modellers daring to work in that era even if it is fascinating and diversified. While Grand Trunk is often the favored line of the era, Temiscouata as a timeless charm and wonderful landscapes. For those well aware of Mike Confalone's Allagash Railway, you can recall his line starts exactly where the Connors Branch ends.

It's also an era with small rolling stock and well-maintained and still elegant locomotives. Perfect to model a prototype with very little compression and a lot of details. The 1910s are also the end of what would be later known as La Belle Époque (the Golden Age) before Europe and the world got caught in one of the worst butchery in recorded history. It tells us of a time when companies cared about their public image and respectability... something that is still closely linked with the steam era glamour.

Why model in S scale?

I've always been a hardcore HO believe since 1986. I mainly dealt with transition era and modern rolling stock and felt it was the perfect scale to do that.

However, over the year I acquired several small steamers and was always seriously unsatisfied with their less than stellar performance. Worst, their small size makes them ill-fitted to be equipped with modern electronic technologies.

Since 1910s trains were still very small, the relative size of a car or a locomotive is similar to their modern era HO counterparts. HO small steamers lack presence when running on a layout. I know it, I acquired a few of them in HO for this project and found them at best underwhelming. Their diminutive size makes them a caricature of their prototype. On the other hand, even a small steam locomotive like a 2-6-0 have a lot of character in S Scale.

Finally, the nail in the coffin. Modelling a turn of the century branchline means most everything will have to be scratchbuilt or kitbashed whatever the scale used. At this point, it's not a bad idea to switch over S scale and make modelling small prototypes easier.

And the track plan?

It may sounds crazy, but the only aspect of Temiscouata activating my creativity is the terminal at Connors, NB. While everything else is interesting, it can be found anywhere in North America and typical. On the other hand, Connors is somewhat special and for this reason, I only model the last station on the line with it's engine facility and the end of steel. It is also good opportunity to concentrate my efforts on what counts instead of feeling crushed by an gigantic endeavour. As Mike Cougill likes to say, a dream layout isn't just about size but about what you feel when working on it.

Posted by Matthieu Lachance at 4:45 PM