Today I decided to handlaid a 18 inches long piece of track to see what I could do with available materials and decide on ties looks and colors. While I didn't have spikes nor track gauge, I decided to go forward. I what to use this piece of track as a scenery design study case on color, ballast, details and vegetation. 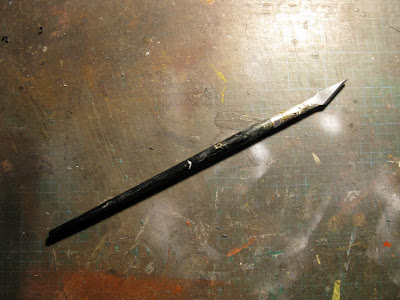 Having watched again TrainMasters TV's Roadshow track laying episode, I custom-built a tool to distress wood. I used an old ruined paintbrush, discarded the hairs and kept the socket. 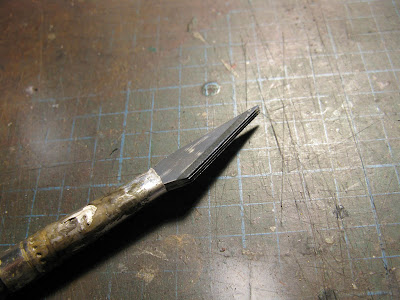 Four dulled old X-Acto blades were glued together with 5-minute epoxy then glued onto the paintbrush. Before gluing, I made sure the socket was shaped in such a way the new blade assembly would fit tightly. This makes for a sturdy yet almost professional tool. As you will see in the following pictures, I think it yields great results without effort. 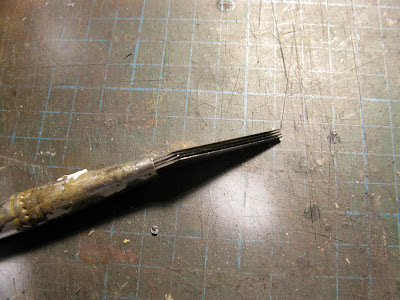 
As much as people like to complain commercial track lack details, when you model early railways, you quickly find out there is far too much details including tie plates.

All the pictures in Connors should Temiscouata never really improved the track up there and things were quite spartan. What I wanted to achieve was similar to this picture shot in Connors.

Yesterday I browsed Bernard Kempinski Aquia Line layout blog to seek information and find how he did model his tracks. Unfortunately, as much as I have great admiration for his work, I thought something was missing and it's not until this morning I found out what it was. Every picture of old railways I found, particularly the ones when they build track, ties are nice dimensional treated lumber but rather squared logs with rounded corners. In the case of Bernard, he does a great job at coloring and he even goes as far has laser cutting extremely irregular ties for a incredible effect. However, I've not seen him rounding the edges. I believe this is seldom modelled and I decided to try my hand at it.


I think the best way to replicate an element is doing it the same way it was done back then. Using rough 3.5mm pieces of wood I once made on my table saw for a wooden bridge project, I started to round the edges with a large rasp. Unfortunately, the result was far too perfect and smooth compared to prototype pictures. 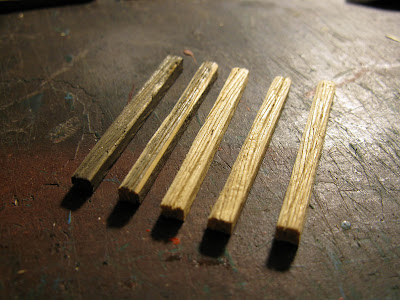 Then I decided to use my hobby knife to trim the edges into the right shape just like it would have been done back in the days (OK, they squared the log and I rounded a piece of lumber!). When I was satisfied with the slightly irregular shape, I use my new tool to distress the wood. The next step was to use a metal awl to split the wood according to what we usually see in real life.

My ties were then given a bath of India ink and 70% ink to give them a light greyish patina. Some other ties had already got a silvery finish by applying a custom mix of peroxyde and steel wool. That old trick age the wood in a matter of a few minutes and have the advantage to completely kill of the natural tan color of new wood. The recipe is simple, in a closed container filled with hydrogen peroxyde you place chunk of steel wool. A quick reaction with rust and disintegrate the steel, turning the liquid a deep oxyde red color. The next day, you only have to apply this liquid after filtering the mix. If you wish a darker color, just repeat the process. This way, I got wood to turn a deep black when I built my Erie Harlem station pontoon.

The rest was easy but quite tedious since I glued every single ties individually to the plywood plank. I know there are much more efficient methods, but that not to bad. 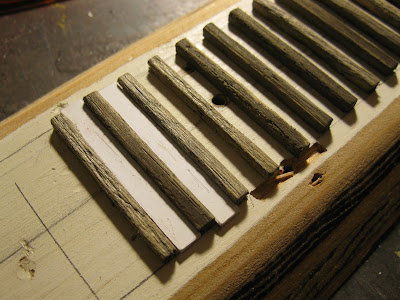 Rails were ripped from an old PECO code 70 piece of flextrack, pre-painted and glued on the ties. Detail West plastic fishplates were added at every 33 feet and I made sure the joints were staggered. A good coat of dark earth weathering powder was added to the rails. 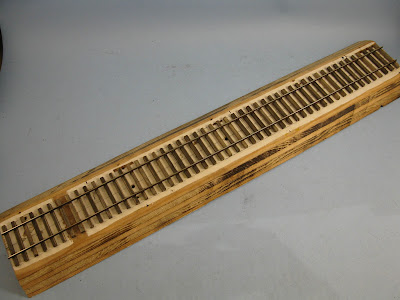 Gluing track with beads of CA glue is the most unreliable way to lay rails and I will surely spike them later when I'll have the material on hand. However, I love the results and it's definitely something you can't get with commercial track. 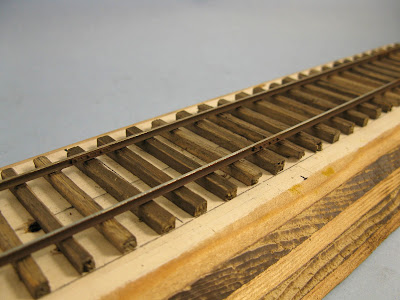 The color is quite close to what real untreated wood kept in the soil would looks like. The added grain is also very realistic. When laying track on the layout, I will probably use exactly the same process except I will glue and sand the ties on the roadbed before rounding the edges and distressing the wood.


In the end, I can affirm track laying is fun as long as you see it as building a structure or a car. No hurry and attention to detail should bring good results. And certainly doing so in S scale really helps to easily add details compared to HO. I would certainly not attempt building a 19th century layout in HO scale!

Posted by Matthieu Lachance at 5:02 PM