So far, the "Thinking Out Loud" series have been quite interesting. I've explored many ideas over the last week, trying to turn them into workable layouts.

Earlier I listed a list of potential ideas. Out of them, many are unworkable because the available space doesn't fit the operation requirements. And no, it doesn't mean there isn't enough space but that the geometry of the room with its inherent obstacles prevents the design of an efficient and nice looking layout.

We often think a layout plan is driven by the space available, but in fact, most of the time what drives the plan is down to earth things like doors and windows, or just the shape of the room. In that respect, Trevor Marshall did a nice job when he explained how he settled on S scale for his Port Rowan layout. He had space - and quite enough - but some basic design elements such as curve radius had the last word. In his case, it meant moving from a Southern Pacific O scale layout to a Canadian National S scale layout. In the end, shaping his ideas accordingly to the physical space and to the type of operation he wanted made the answer crystal clear.

In my case, I prefer a uncluttered room were I can have enough space to move around. It thus means the idea of a continuous run layout isn't implementable without seriously making the room hard to navigate (duck under, removable parts, etc.). It also means the idea of building a steam era Charlevoix layout is dead for the moment. But the good thing is that clearly Baie-Saint-Paul is a great prototype for an operable diorama that can fit a 18" x 10 feet shelf.

In the case of Jérôme, he has space but no wall space to install a shelf layout. The choice of Harlem Station as an island layout in the middle of a room à la "board game" suits particularly is space but also his requirement in hard and complex operation. Jérôme loves mind games and realistic operation. Like everybody, he loves nice scenery, but it's not his top priority while it is to me. With Harlem Station we cover all our bases.  A reader recently commented how it was amazing this "boring track plan" was in fact very inspiring.

Talking about small island layout, I cannot forget to talk about Fillmore Avenue Roundhouse by Rick De Candido. Rick loves yards, locomotives and passenger trains. But he also knows he doesn't have the space for all that in his apartment. While gathering information on engine terminals, he found out there was enough action going on at a roundhouse to keep a man occupied... In fact, to keep 5 men occupied over a 30" x 12' island layout. Far to be a compromise, his layout truly shines as a credible rendition of something too often modelled but rarely operated.

While discussing with Jérôme about Fillmore, we came back on that subject. In the past, we often wanted to make a version of Limoilou Shops in HO scale for our previous version of Hedley-Junction. Lack of space prevented this... and to be honest, I'm not sure it would have looked good. Anyway, using the same space than Rick, I tried to see if the venerable and long lost Limoilou roundhouse, car shops and store houses could become a worthy diorama or layout. The answer speak for itself, I guess we've got a winner! With the help of a transfer table about 3 feet long, it doesn't require too much turnouts to make this dream come true. And there's a good provision of switching: coal tower, sand tower, ash pit, machine shop, coal to the boiler house, store house, oil house and car shop. Unfortunately, informations about Limoilou roundhouse is extremely rare. I've never seen a good picture of the building itself. I only know it was a concrete structure built circa 1912 by Canadian Northern (a common occurence at that time). A picture of the coal tower does exist and the machine shop is still standing though in bad shape. Fortunately, two sets of insurance maps provide enough information to make a good plan. But at this point, the big gaps in data would prevent this layout to come into existence. And let's face it, Rick is a very well-organized man that can make such a layout works perfectly. I'm no such man and for the time being, I'll continue to admire his inspiring work. 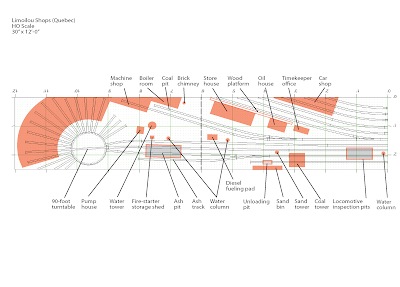 By the way, I'm truly impressed to see the amount of people following and commenting my several model train blogs. I never expected that. Getting feedback, discussing ideas, exchanging information and swapping material is a great part of the hobby I didn't had a change to experiment in my previous two decades of modelling. Each month, I see mention of these blogs on other peoples' blogs. Recently, there was again these obligatory articles about the hobby dying. I honestly don't share this opinion at all. What I see is a great number of people getting involved again or for the first time in this hobby. Most of them are dedicated to a more pragmatic approach to model railroading. Many concentrate their efforts on smaller but better designing layout with a greater care to details and operation potential. Just following the links of my visitors, I discover new great layout discussions each month and learn about obscure branches or prototypes I would have never heard of in the past. The most fascinating thing is that many of these layouts are built by teenagers! Back then, I was paralyzed believing I could never build a worthy empire. They are quite ahead of their time and at least, they work for REAL on REAL layout, learning many skills, bashing stuff, painting their backdrop or detailing and weathering their locomotives. This is extremely inspiring and the proof there is still a lot of new branches sprouting from the old trunk.
Posted by Matthieu Lachance at 3:00 PM