I finally updated the original HO scale track plan after a lenghty process of scaling and adjusting each element. I generally use xTrackCAD to draw my plan, but I couldn't locate a Fast Track S scale Library, so I draw it by hand using Tim Warris PDF templates as a guide. 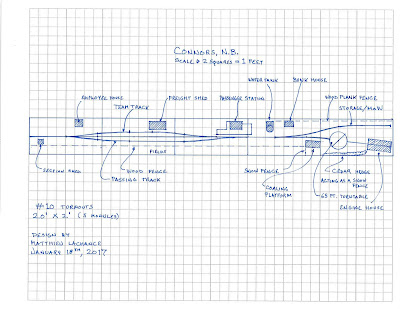 Redrawing the plan allowed me to find out new details I overlooked in the past. Among them are fences and each of them tells us a peculiar story related to its function.

The first fence is the ubiquitous one separating the right of way from the fields. I think the old picture showing a cow grazing on the siding at Connors is enough to make this point clear! While we, modern people disconnected from large animals, can hardly imagine how a cow could be a match against a steam locomotive, we ought to remember 19th century locomotives, particularly 4-4-0, were extremely lightweight by today standards and could be easily derailed at the most insignificant obstacle on the track. Forget your YouTube train videos plowing through trailer trucks as if they were paper toys. Back in the days, any large farm or wild animal posed a serious threat that could results in serious injuries, casulties and material loss.

This became quite clear in my mind when I recently read the book The Old Somerset Railroad: A Lifeline For Northern Mainers written by Walther Mcdougall. The author had the pleasure to meet several former employees of the Somerset that worked in the early 20th century under the old management. Many of them recalled tales of 4-4-0 badly derailed by cows taking advantage of neglected fences. The most fearful event occured when a train met a bear crossing the large Gulf Stream steel trestle up Bingham. The train crew knew perfectly they had no chance. The locomotive would hit the bear, derail and crash in a 125 feet deep ravine. Chances for survival were inexistant. Fortunately, when the train was about to strike the dangerous animal, the afraid bear simply forgot it's instinct and jumped off the bridge, meeting its deadly demise on a rock by the stream.

Less impressive and dramatic are other fences found near the engine facilities. Near the coaling shed, a snow fence protect the turntable pit from getting filled up with snow. To complete this defensive wall, a cedar hedge was planted between the coaling shed and the engine house. This is the first time I see a railroad using deliberately vegetation as a mean for snow fighting. It was a common knowledge back in the days in rural areas, which is implemented again by farmers since the 2000s. I think it would make a very neat detail on a layout, one seldom seen, even on diorama.

The last fence is a large and opaque one located south of the storage/MoW siding near the engine house. It separate the railway property from the public road. At first, I was surprised they cared to build such an elaborate fence in open country, but it makes sense since the most dangerous activities were perform in that area and it needed to be secure. Also, just on the other side of the road are employees houses which could explain with they bothered putting up a fence there.

These fences are neat little details that can be easily modelled, particularly in 1:64, and that gives a deeper sense of the place. Incorporating them on the layout add interest but also helps to visually frame the scene by creating hints at the railway property limits.

Posted by Matthieu Lachance at 8:21 AM