This is a long due update about Connors Branch; a minimalistic approach to pre-WWI modelling.

Even if this structure has been tore down decades ago and I’ve never found (nor looked for) actual plans, a very similar Temiscouata depot still survives in Degelis, QC. My guess was the architect set a building depth of 24ft, which is quite a typical dimension for the era, and used 36 inches wide windows. I was right and when I started drawing, several dimensions were corroborated by scaled pictures from the time. All in all, it took about 45 minutes to draw. 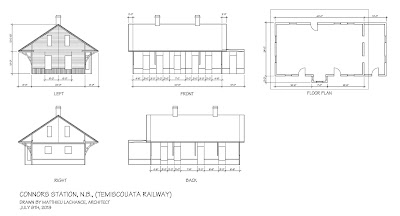 It means this set of drawing is fairly accurate given the partial data at my hand. The left side, front and right sides are probably exact within an inch or two. However, the openings layout at the back is pure speculation based on Degelis station. I’ve never seen a picture of Connors station backside and suspect it was quite similar since Temiscouata Railway stations were fairly consistent, following a standard plan with very little deviation.

If I build this structure, I’m seriously thinking about making two versions. The earlier dark red siding and pale trims scheme and the later worn down pale siding and dark trims scheme. Unfortunately, at this point I don’t know what the later scheme colors were. I suspect the pale color was probably some kind of yellow/tan/buff while the trims were a brownish/red color. In a word, something similar to the later Boston & Maine scheme.

I also discovered recently Connors used to be spelled "Connor" during its few first decades of existence. Later in the 20th century, the name became known as Connors. When modelling the station name plate, I'll have to take this into account. Temiscouata used to paint the station name on the siding directly, generally in letters that were about 30 inches high.

And for those able to read between lines, yes, I am indeed working part time on Connors right now. So far, three 14" x 60" waffle-type module have been built to support the layout. I've also found out it was useless to try kitbashing a Walthers 90ft turntable into a 65ft turntable. Living with others' compromises isn't my cup of tea and I prefer to build things from scratch. Home improvement left me with a huge stack of scale lumbers and thin pine planks which will be put to good use.

As for the rest, Connors as always been a slow burning project and will probably stay that way! I've learned to temper my expectations while striving for a meaningful hobby experience. I'll have many occasions to write about these compromises and the way the enable positive things in the future...
Posted by Matthieu Lachance at 10:47 AM

Email ThisBlogThis!Share to TwitterShare to FacebookShare to Pinterest
Labels: Structure